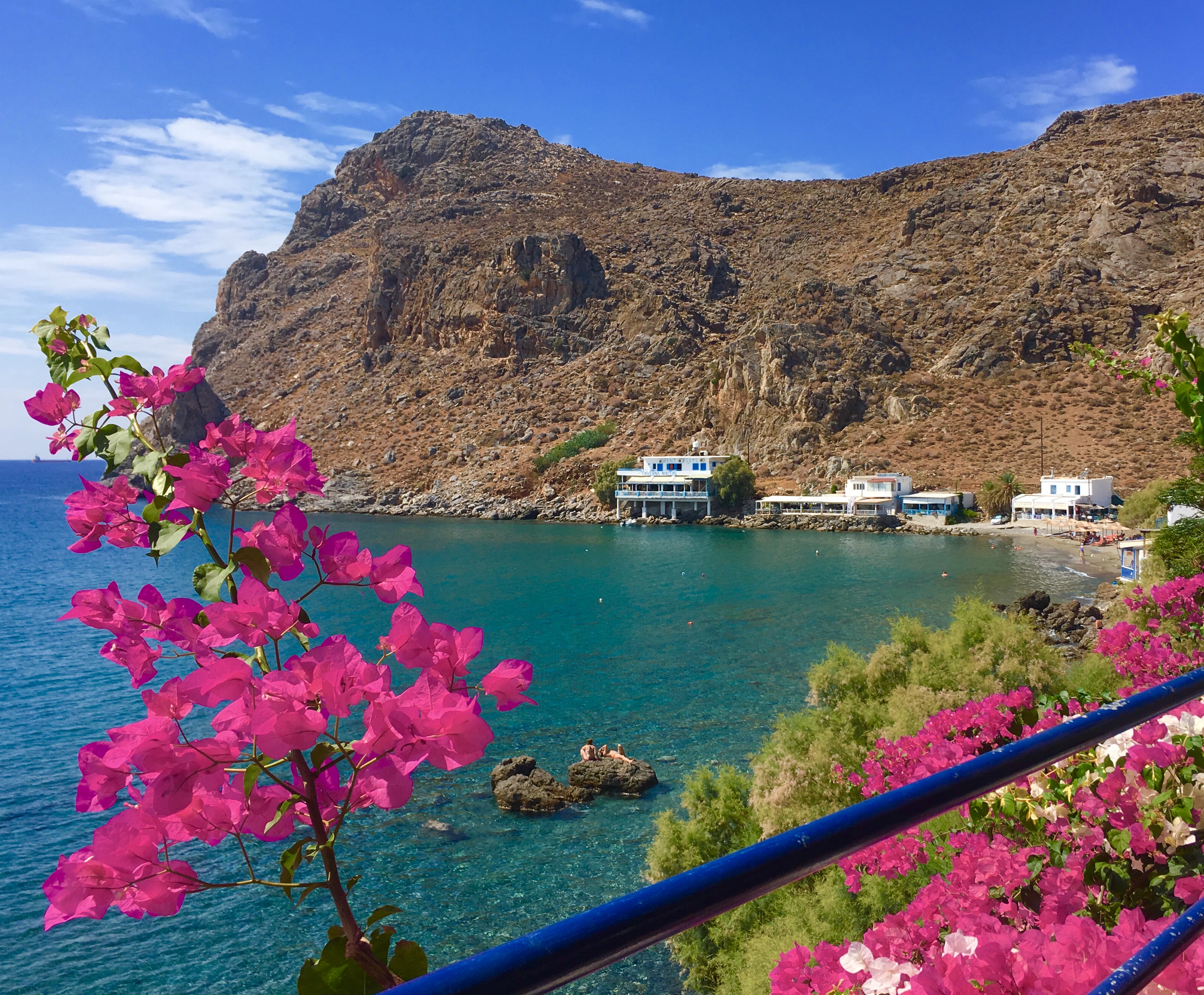 Not only is Crete a kayaker’s paradise, it is home to world famous hiking trails. Hike the majestic Samaria Gorge from the mountains to the sea. Marvel at the Mediterranean’s expansive beauty from a seaside hilltop. Stroll along the beach en route to a hearty dinner and comfortable inn. Travel a portion of the E4, a renowned trans-Europe trail. You wouldn’t expect an island to have such varied terrain, but does it ever--from mountains and gorges to valley meadows to seaside bluffs to flat, sandy beaches. Don't miss out on this sensory overload of a hiking trip!

Day 1: The trip officially begins in the morning at the Heraklion airport where NWP staff will meet you. Exact meeting time will be determined once flight schedules from Athens to Heraklion have been finalized. From the airport, we will head to Knossos, the famous Minoan palace just outside Heraklion. We will have a tour of Knossos, then shuttle down to Matala on the south coast. There are many options for lunch tavernas in Matala. We’ll have some free time in the afternoon to explore Matala. We’ll get together to enjoy the incredible sunset, have a drink and begin to get to know one another. We will review the itinerary for the week and answer whatever questions you may have.

Day 2: We’ll spend the day in the Matala area, hiking over to Red Beach in the morning, then to Kommos Beach in the afternoon. We will also have some time for cliff jumping, snorkeling and exploring the famous caves (legendary homes to Joni Mitchell, Cat Stevens, Bob Dylan and others in the 60’s) which surround the bay. We’ll have an optional sunset hike before dinner.

Day 3: We’ll get an early start today in order to stop and visit the ruins of the Minoan Palace of Festos on our way to the trail head for the Samarian Gorge. We will put on our hiking shoes and grab our walking sticks (critical item of equipment!). The Samarian Gorge is a “must see” for every visitor to Crete and this incredible national park draws 1,000-2,000 visitors per day. We have designed our itinerary to be able to experience the Gorge after the vast majority of hikers have already headed down. Most visitors to the Gorge have to catch the ferry at the end of the Gorge. We, however, spend the night in Agia Roumeli, the town where the Gorge ends. We’ll celebrate our accomplishments with a wonderful dinner right at our hotel.

Day 4: Our second day in Roumeli gives us options to hike along the coastline toward Sougia or head up into the hills to discover the ancient Turkish fortresses. The Samarian Gorge is the most strenuous hike of our itinerary and having an easier day to follow gives our legs a chance to rejuvenate.

Day 5: We’ll depart Roumeli and head 8 miles along the coast to the small (and beautiful) town of Loutro. Along the way we’ll pass Agios Pavlos, an ancient seaside chapel commemorating the visit of St. Paul to that very spot. Lunch today will be at the quaint beach of Marmara, a spectacular spot for cliff jumping. Then it’s on to the charming village of Loutro for two nights.

Day 6: Our second day in Loutro finds us hiking over 6 miles up to the monastery perched high on the hillside. From there, we hike to the small village of Anopolis for a bit of refreshment. Then on to the Aradena Gorge where we will likely be the only hikers. Back in Loutro, we will have another optional sunset hike to the Venetian fortress ruins that overlook the village.

Day 7: We’ll start the day with a spectacular hike along the coastal route to Sfakia. A quick dip at Sweetwater Beach along the way is always an option. From Sfakia, we will shuttle to Moni Preveli, an ancient monastery high on the cliffs above the sea which is still home to active monks. From Moni Preveli, we’ll hike a short distance to Palm Beach for a cappuccino stop and possible swim in the fresh water estuary. A celebratory dinner will provide a wonderful opportunity to share memories and recount the week’s events.

Day 8: After breakfast, we will shuttle back up to Heraklion. We will have a chance to visit the renowned Heraklion Archaeological Museum before heading to the airport to catch departing flights.

THE HISTORY OF CRETE

Crete lies at the crossroads of three continents, Europe, Africa and Asia. The largest Greek Island, Crete is the home of Europe’s earliest known civilization, the Minoans. The strategic position of Crete in the middle of the Mediterranean has led to an almost constant battle to control the Island from ancient times until the present century.

From about 2000 B.C. onwards the new immigrants with their higher degree of civilization join with the indigenous population to become the “Minoans”. A sophisticated society develops. Skilled craftsmen such as stonemasons, potters, metalworkers, jewelers and weavers are at work. Agriculture thrives. Metal tools replace stone. The society acquires a structure and hierarchy and palaces are built at Knossos, Festos, Malia and Zakros. The Minoans have a merchant fleet selling their wares throughout the Mediterranean with trading posts and colonies in places such as the Cyclades, Rhodes and as far afield as Asia Minor, Egypt and the East. Trade and not military power extends their Empire. Around the time of 1700 B.C. the palaces were destroyed, the most likely cause being an earthquake although some historians believe it may have been a tidal wave. The palaces were rebuilt even more splendidly and the society and culture continued to prosper. They were decorated with frescoes and were often on several stories with courtyards, wide staircases and complex plumbing and drainage systems. Art flourished with the rebuilding of the palaces, not just frescoes but sculpture including naturalistic human figures and animals have been excavated. As the craftsmen became more skilled so their wares changed. Beautiful pottery and stone vessels in many different shapes and designs and often decorated with local scenes dating from this period have been found. This flourishing, peaceful and wealthy society with its influence felt throughout the Mediterranean and beyond was not to last. A minor earthquake in about 1600 BC was the beginning of the decline. Complete destruction followed. Knossos survived but soon the Mycenean Greeks invade from the mainland and take over what is left of the Minoan society.

The Mycenaens dominate the Minoans and a hybrid of the two cultures develops. Crete is no longer the trading power it was and the Minoan dominance of the Mediterranean is at an end. The Mycenaens use weapons to defend themselves against the waves of Dorians who are coming to Crete after the Trojan Wars.

The Dorians drive out the Mycenaens and form their own Class orientated society. The original Cretans tried to preserve their identity and formed settlements apart from the Dorians. They have become known as Eteo-Cretans (real Cretans). Crete became an Island of small independent states with no unified culture. CLASSICAL AND HELLENISTIC CRETE- 480-67 B.C. Crete becomes a shadow of its former Minoan glory. Used as a base for pirates the sea trade in the Mediterranean is disrupted. This, combined with the Island’s strategic position drew the Romans to Crete.

After a couple of earlier abortive attempts, in 69 B.C. a successful Roman invasion took place. After two and a half years of fierce fighting, the Cretans surrendered to their fate. The Romans brought prosperity and a level of organization not seen since the Minoans. Large settlements with roads, irrigation systems and aqueducts developed. Agriculture flourished and Crete once again assumed an important position albeit within the Roman Empire.

St. Paul is thought to have brought Christianity to Crete in about 50 A.D. and there is a chapel on the beach at Agios Pavlos to commemorate his visit. Christianity spread rapidly across the Island but the early Christians were persecuted for their beliefs. At the end of the fourth century the roman Empire was split in two with Crete belonging to the eastern part belonging to Byzantium (Constantinople, Istanbul today). Although the many Churches built during this period with their elaborate frescoes testify to the prosperity of these times, the Island held an insignificant position in the scheme of things. There is soon a new threat to Crete. The rapidly developing Arab world is casting their eye in her direction. In 824 A.D. an Arab Saracen force invades the Island and meets little resistance. They use the Island as a base for attacks on shipping and are little more than pirates. For over a century they control the Island. The Byzantine rulers do little to help their colony until I 961 they drive out the Arabs ina huge and bloody battle which decimated the Cretan population and wipes out the Saracens. The island reverts to Byzantine rule and its flagging population is boosted by immigrants from the mainland and Byzantium. The Crusades were the first that brought the next of Crete’s rulers. Turning their might on Byzantium the Crusaders sack and burn Constantinople and the Empire is divided up. Crete is sold to the Venetian Republic for a small sum. 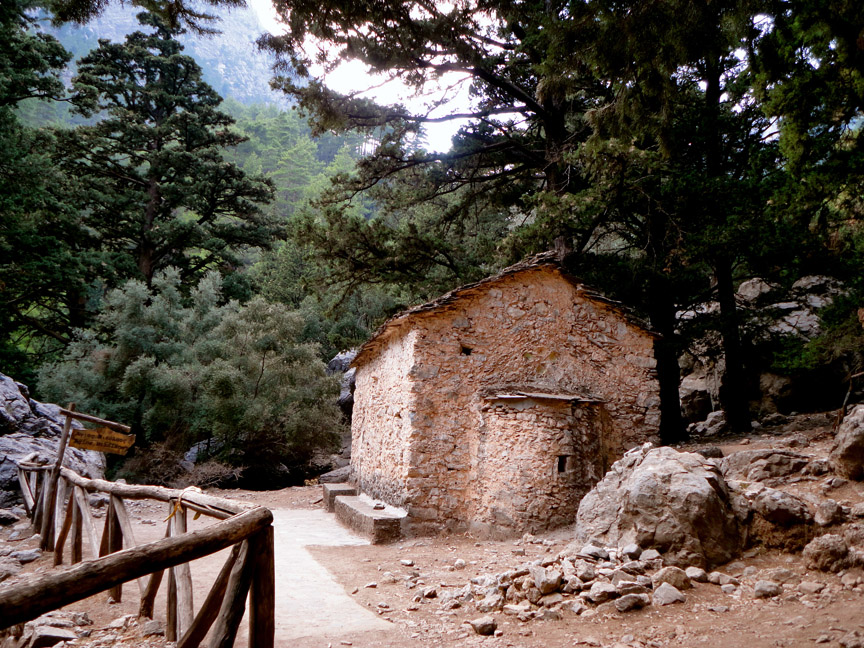 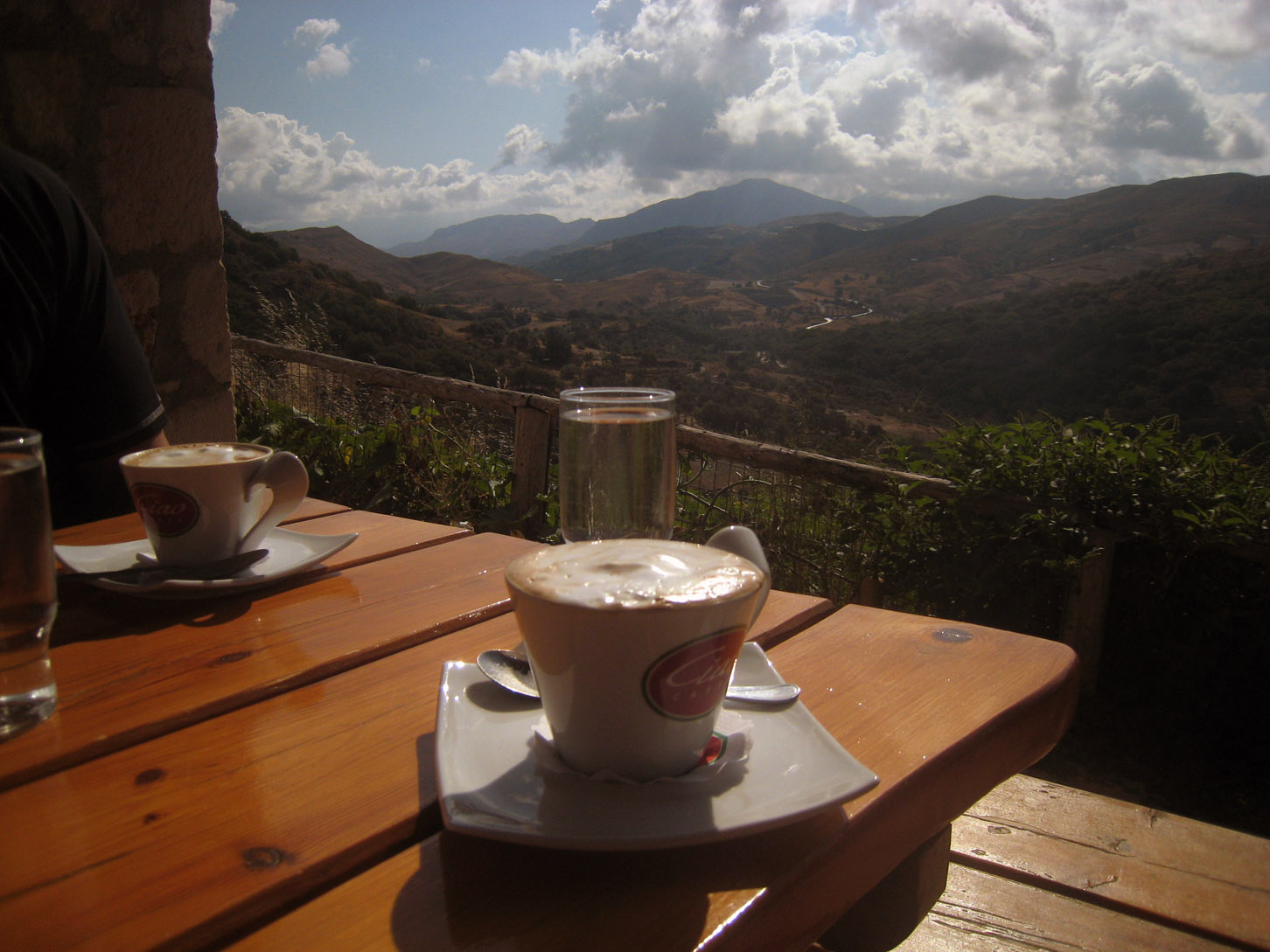 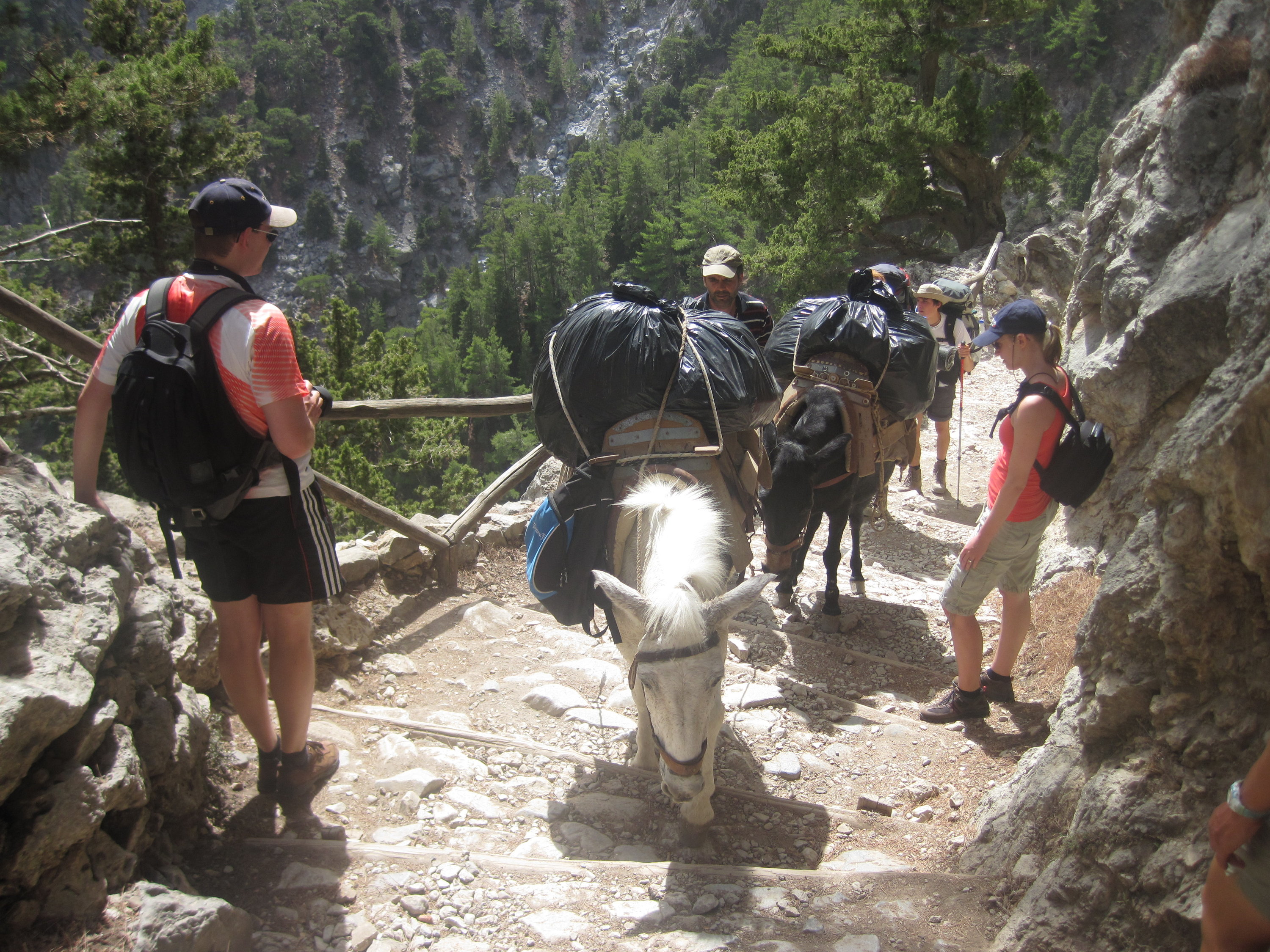 In the Samaria Gorge 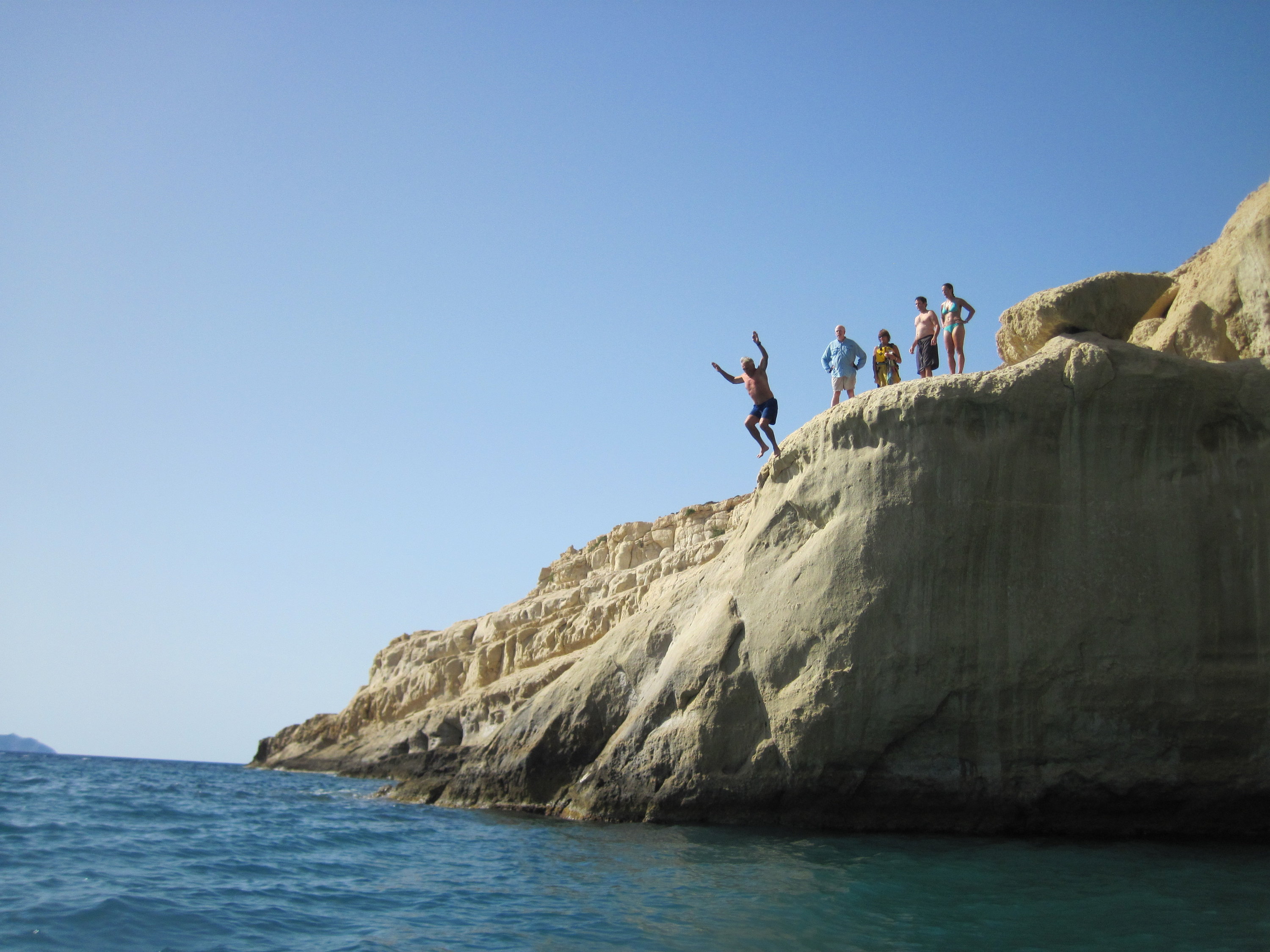 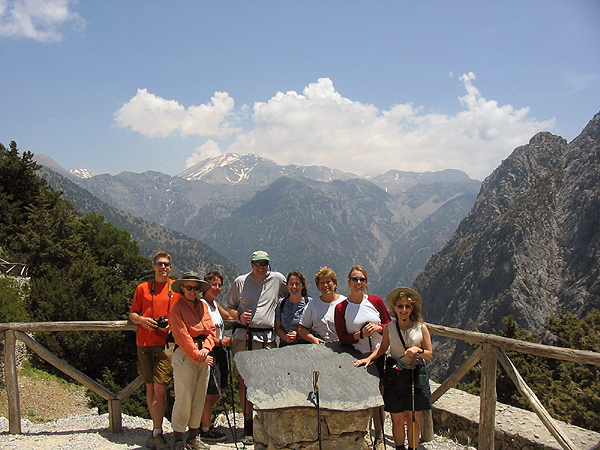 Preparing to Hike the Gorge 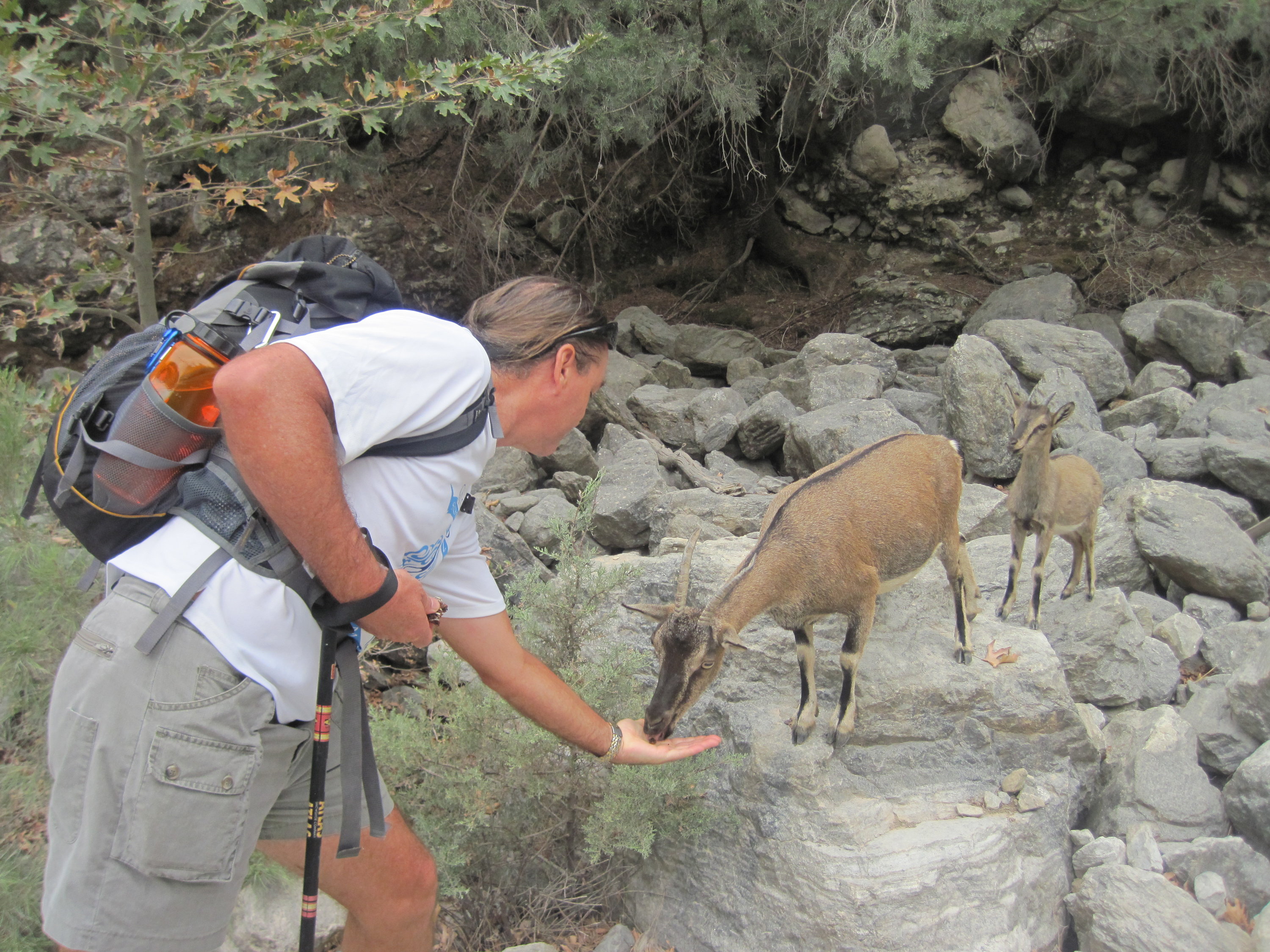 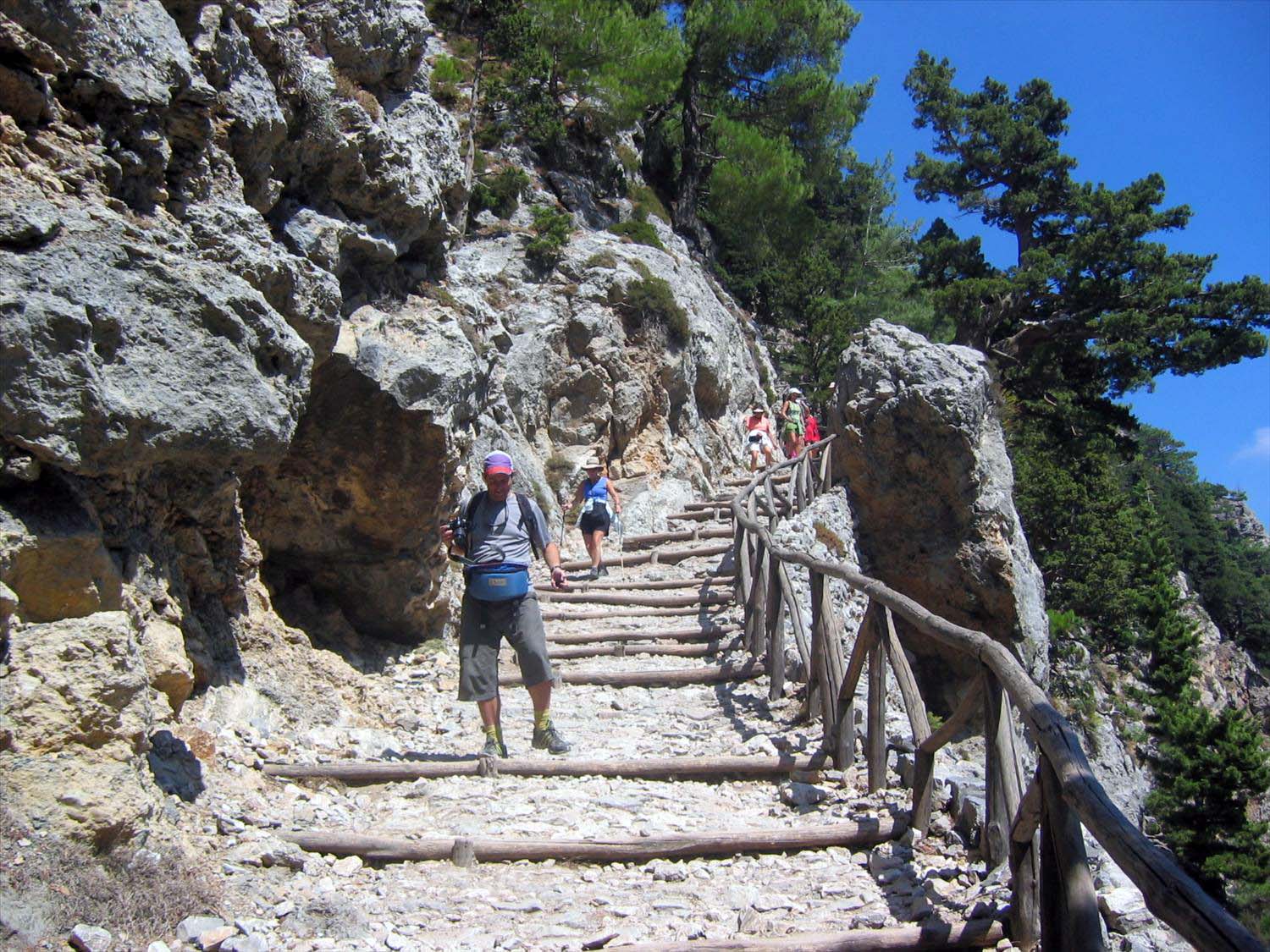 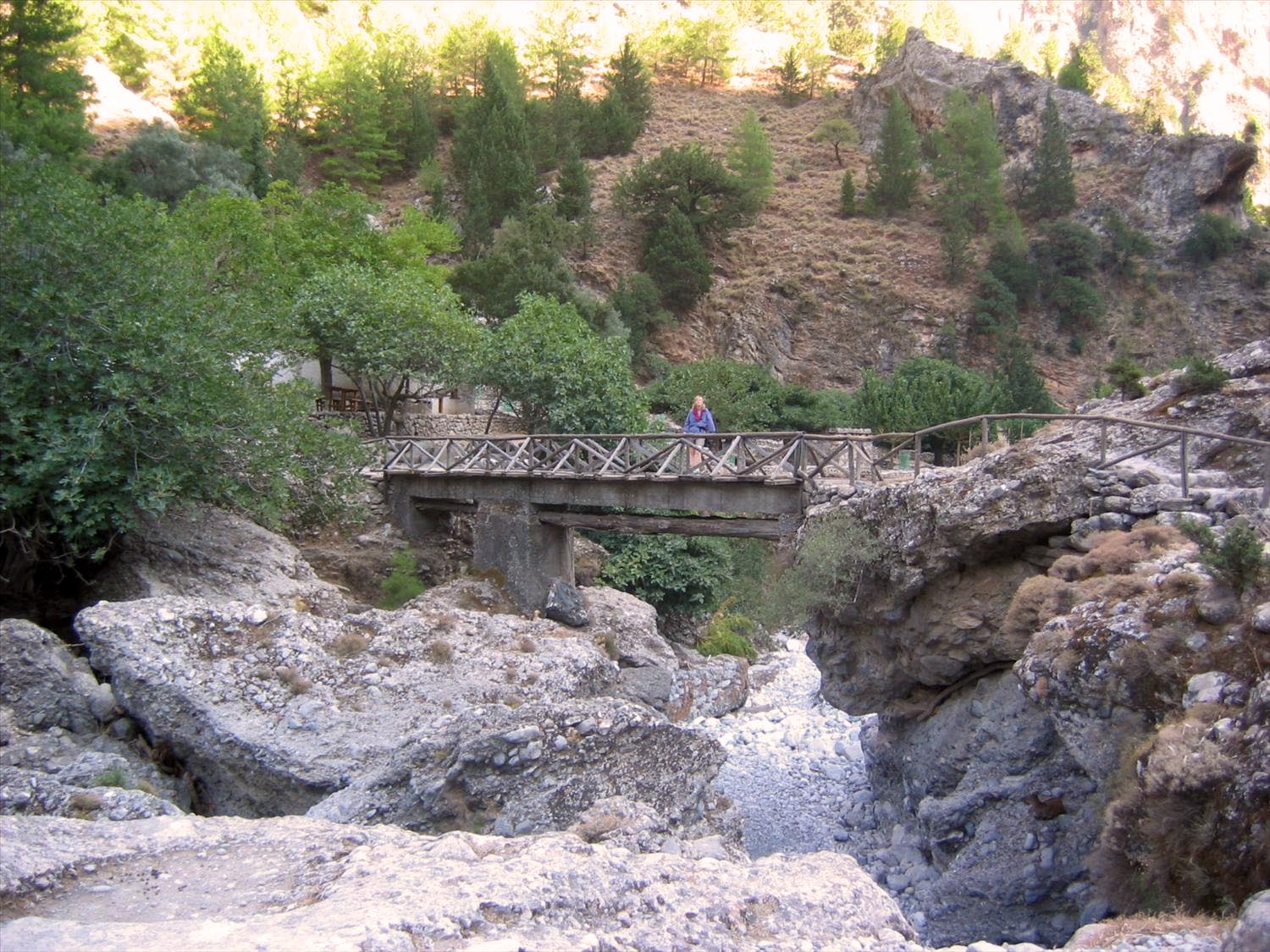 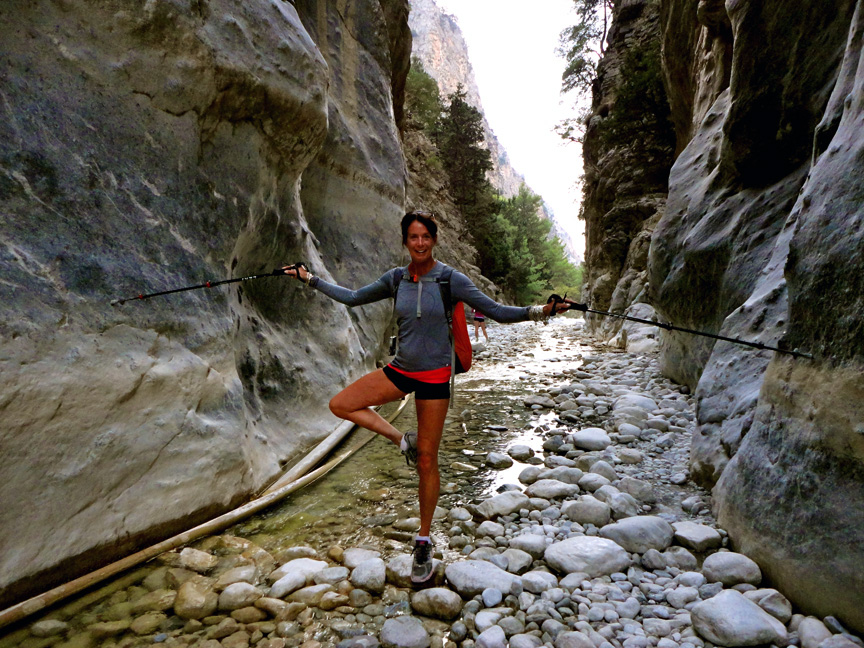 At the Sideroportes, or "Iron Gates"