Let’s Paddle to Wisconsin Day One 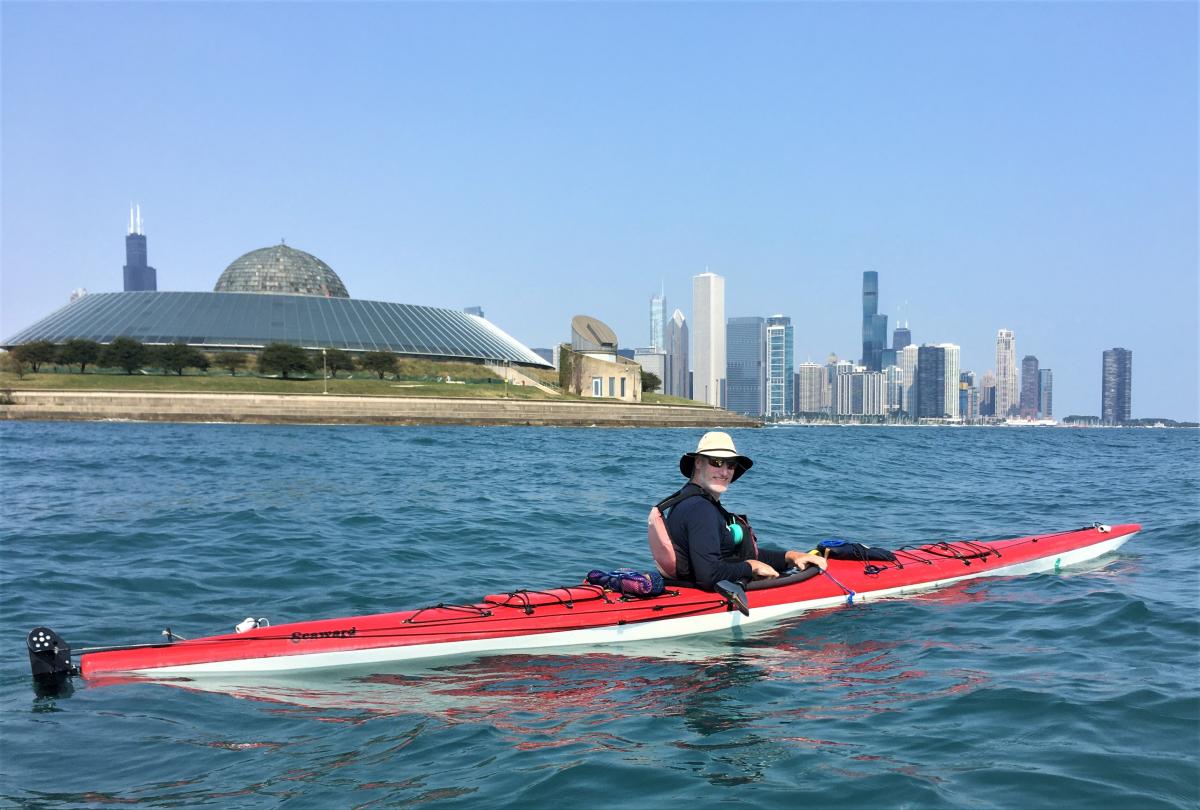 By the end of August, our summer kayaking and stand up paddleboarding season had begun to wind down. Up to then we’d been busy running youth day camps and paddling with folks of all ages during evenings and weekends.

But now the kiddos were returning to their studies, and we had a bit of weekday time on our hands. David, a young kayak guide, mentioned in passing to Keith, our Program Director, that he’d like to do a longer paddle in the city someday. In response, Keith suggested paddling Illinois’ entire Lake Michigan shoreline. “And let’s do it this week.”

Feeling that familiar sense of revitalization that accompanies an imminent, physically challenging adventure, we launched our kayaks at Calumet Park as the early morning light brought the plant and refinery towers along the Indiana shoreline into focus.

As we paddled around the gigantic breakwater that protects Calumet Harbor, we caught our first unobstructed view of the skyline, tiny and hazy in the distance. As the day progressed, that skyline would loom slowly larger before us, tower over us, then slink back into the hazy distance to the south.

We spent the first few hours marveling at the mini skyline of Hyde Park and south shore highlights like Promontory Point and the 63rd Street Beach House. As always, it was a blast to kayak right up to Chicago landmarks like the museum campus and Navy Pier. It’s so fun to be in a little sea kayak amongst all these huge structures.

We looked at our watches and realized that we’d better keep putting the hammer down if we were going to make it to Wilmette in time for the evening’s activities. After our 9-hour personal day on the water, Keith and I were scheduled to take a bunch of folks paddling at Gillson Park at 6 PM for a birthday party.

Since the Chicago beaches were all closed, we pressed on to Montrose and scrambled up onto the Hook for a lunch break, where we joined the ranks of the other would-be beach goers soaking up the beautiful day on the giant concrete steps.

As we set out for the final stretch of our roughly 30-mile day, a group of twenty-something ladies who were out swimming had some burning questions for young David as we passed by. “I want to ride YOUR kayak,” one called out as he bid farewell. Keith and my juvenile senses of humor had a lot to work with for the rest of the afternoon.

Keith and I wouldn’t have minded a mellow 2-hour sunset cruise with some pleasant conversation after paddling 30 miles earlier in the day. But what we got was a hilarious, non-stop kayak rescue clinic with a constant soundtrack of, “You fell out again?! You suck!” “Y’all should be ashamed!” I swear we must have done 50 kayak rescues in two hours. At times it felt like part of some weird CrossFit workout.

But it was honestly the perfect cap off to an already great day on the water. Keith, David and I covered as much distance as we could and had a great time doing it. And here we were having a great time going absolutely nowhere—just splashing around with fun folks who were happy to be out talking smack with their family and buddies and enjoying our Great Lake while the sun set behind the Bahai Temple. Not bad.